skip to main | skip to sidebar

I'm a big fan of home media streaming. Storing all of your photos, music, and video files on a single server, and then accessing these from your PCs and TVs around the house makes a lot of sense to me. For many years now, I've run such a system at home, with a single large central server, and a number of clients of different kinds. My two favourites are my Logitech Squeezebox which is the perfect on-line music player, and a modified old XBOX running the XBMC media center.

If you are unfamiliar with XBMC, it provides a slick interface to connect to your TV, through which you can access all kinds of media stored on network hard disks. I tend to use mine fo viewing photos on my TV, and accessing centrally recorded TV programmes from my MYTHTV viewer. Anyway, whilst an XBOX + XBMC works well, it cannot play high definition content, not to mention the fact it looks a bit ugly, and the fan makes a lot of noise whilst running. So, when I saw Acer had recently released a tiny, cheap desktop (or 'Nettop') PC called the Aspire Revo, this looked like the perfect upgrade for my XBMC system.

I won't go into detail about the Revo's spec here - many other sites have that well covered already. I purchased mine from eBuyer in the UK - the linux version, with 1Gb RAM and 160Gb hard-drive, for the bargain price of £160 including free delivery. I then set to installing this with XBMC, which in the most part was very simple, but I did struggle to get the WLAN working. Therefore, I thought it might be useful to note my installation procedure here, in case anyone else can benefit from the experience.

Before we talk software, here are a couple of shots of the physical installation using the supplied mounting kit. Neat huh? 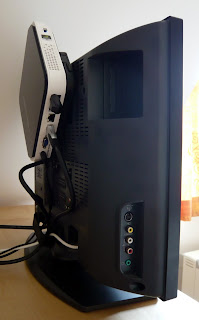 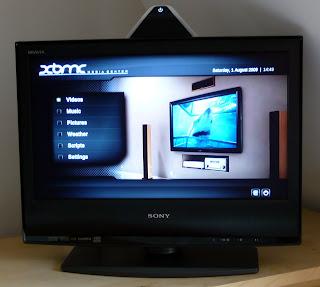 Right, now for how I went about installing this. Proceed as follows:

Next, copy this, and then sudo vi /etc/wpa_supplicant.conf and make the file look like this:

And that's it for getting the WLAN working. The final base configuration required to ensure XBMC can play everything correctly is as follows:

The rest of the XBMC configuration is up to you, but having done the above, you have a solid, fully working system to build on.

First impressions of the Revo are excellent, and it appears to be perfectly suited to the low-cost media centre application here. I hope this information was useful - thanks for reading.